Looking for something to celebrate these holidays? Advocates achieved a record year of wins for farm animals and alternative proteins. Here are the highlights:

After years of focused campaigning, advocates achieved milestone wins in ending the use of one of factory farming’s cruelest inventions: the battery cage.

1) Europe pledges to end the cage age. The European Commission promised the biggest animal welfare legal reform in history — a ban on almost all cages and crates for the more than 340 million farm animals caged across the European Union. The pledge was a direct response to advocates’ End the Cage Age European Citizens Initiative. The next few years now offer a unique window of opportunity to influence the scope and timeline of the Commission’s proposed ban — EU citizens can start by weighing in here — and to ensure the European Parliament and member states support it.

2) US breaks cage-free records. A third of US hens — over 100 million animals — are now cage-free, up from 7% in 2015. That’s thanks to the 360 corporate cage-free commitments and seven state cage egg sales bans advocates have secured since 2015, including most recently in Nevada. Next Saturday, the two most important of those bans will come into force, as both California and Massachusetts will stop the sale statewide of all eggs from caged hens. (California will also stop the sale of pork derived from crated pigs.) Advocates fought off multiple pork industry lawsuits seeking to unwind both laws, which should benefit over 40 million hens and 500,000 pigs alive at any time.

3) More nations reduce cage use. France’s and Italy’s hen flocks are now 64% and 60% cage-free respectively, almost double what they were five years ago, thanks mostly to advocates’ retailer-focused campaigns. This progress also aided wins beyond the EU. Next-door Ukraine announced it will replace battery cages with larger enriched cages for its 90 million hens. And in the world’s largest egg producer by far, China, the nation’s biggest retail trade group launched a new cage-free standard, while a new report found that seven of the nation’s top 20 egg producers now offer cage-free eggs, or will soon.

4) Multinationals go cage-free. Advocates won pledges to eliminate cages from the global supply chains of some of the world’s largest fast food corporations, including Yum Brands (KFC, Pizza Hut, Taco Bell), Focus Brands (Auntie’s Anne’s, Cinnabon), and Inspire Brands (Arby’s, Dunkin’). The Humane League found that 85% of all corporate commitments to go cage-free by 2020 had been fulfilled, while Compassion in World Farming found that 71% of major companies with cage-free pledges are now publicly reporting on their progress in implementing them. That included 28 companies that fully implemented their pledges this year. 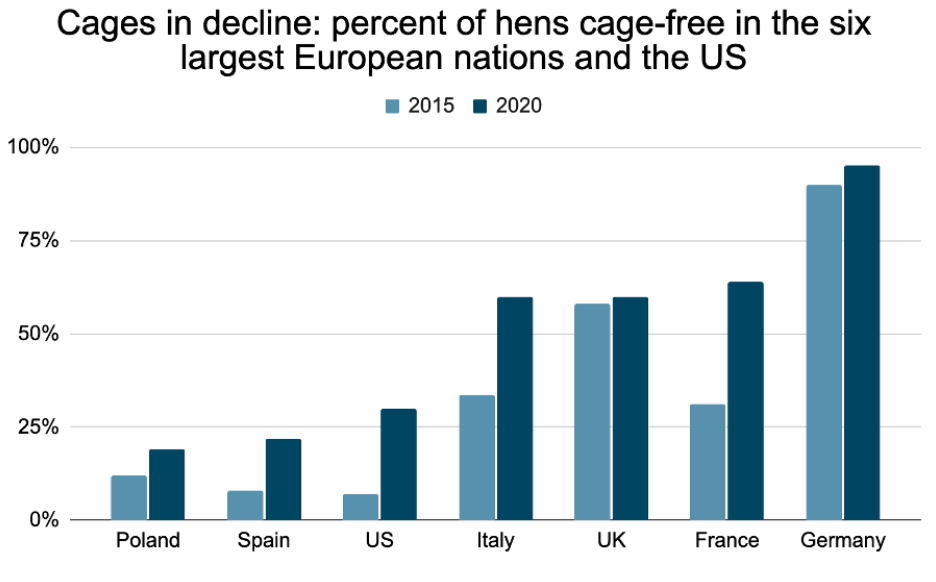 The percentage of cage-free hens has risen in all of Europe’s six largest egg producing nations, especially in Spain, Italy, and France. It’s also risen sharply in the US.

No Longer Just the Alternative

5) Investors double down on alternative proteins. A new FAIRR reportfound that private investors invested over $7B into alternative proteins over the last decade, most of it in the last three years. It also found that the largest 25 public food and retail companies mentioned plant-based protein five times more often in investor reports in 2021 than just two years earlier. Investors likely poured more than $1B into cultivated meat startups in 2021 — more than all prior years combined — driven by a $347M raise for Israel’s Future Meat Technologies and a $100M investment by JBS, the world’s largest meat company. (Though three new techno-economic analyses also sparked a debate on cultivated meat’s scalability, well-summarized by Rethink Priorities here.)

6) The US and EU invest in alternatives R&D. The US Department of Agriculture awarded Tufts University $10M to establish a National Center of Cellular Agriculture. The Chair of the US House of Representatives Appropriations Committee, Rep Rosa De Lauro, called for “parity” in public R&D funding between animal products and alternatives — an ideal that would imply hundreds of millions more for alternatives. The EU announced €32M in new funding for alternatives R&D, and dropped plans to impose onerous labeling requirements on plant-based dairy products, after an effective lobbying campaign by alternative protein advocates. 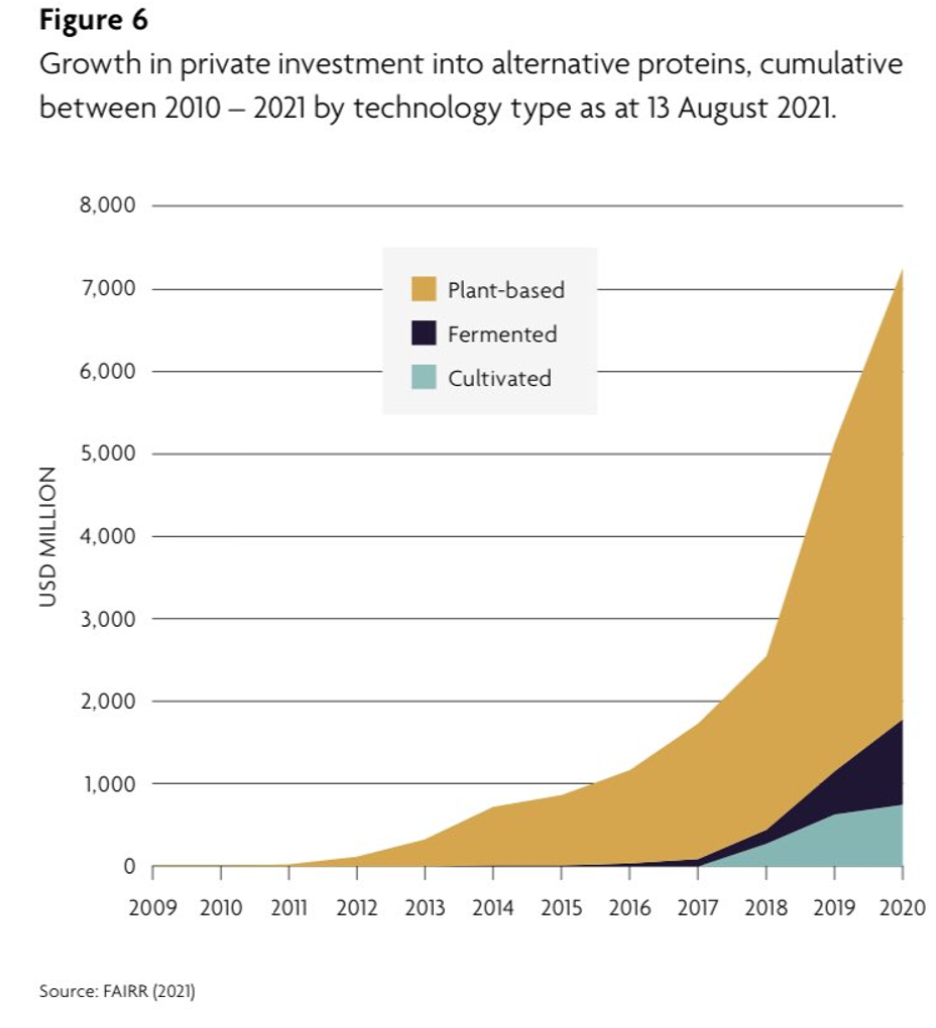 Over the last decade, investors poured more than $7B into alternative protein. Source: Appetite for Disruption: The Last Service (Sept 2021), report by FAIRR, which can be requested here.

Beyond the cage ban, advocates achieved a set of major wins in Europe.

7) Europe's biggest nations push reforms. France and Germany banned the killing of day-old male chicks, and joined five other nations in calling for an EU-wide ban. (The Italian Parliament voted for a similar ban, though it still needs Senate approval.) Britain’s government pledged a partial live export ban and subsidies for farm animal welfare improvements, and said it was “considering the case for … [restricting] farrowing crates for pigs and cages for laying hens.” Germany’s new coalition government pledged mandatory animal welfare labels on meat and subsidies for meat alternatives, as its new (vegetarian) agriculture minister vowed to be his country’s “highest animal welfare advocate.”

8) European food companies up the ante. Germany’s four largest retail groups all pledged to stop selling the worst factory farmed animal products over the next decade, potentially sparing hundreds of millions of animals from the worst conditions. The largest Dutch retailer, Albert Heijn, and the largest Danish retailer, Salling Group, both agreed to stop selling chicken with crippling low welfare genetics. Another 77 European food businesses committed to improve the welfare of broiler chickens, including fast food giant Subway, which adopted a pan-European commitment.

10) Fish finally get their day. The European Commission proposed a series of future scientific opinions on the welfare of commonly farmed fish species; in the past, such opinions have often led to new legislation. German retailers signed on to new fish welfare standards, and German wholesaler Metro AG announced new fish welfare standards in Turkey. The British government leaked that it is mulling new fish welfare legislation. It also expanded its animal sentience bill to include octopuses, crabs, and lobsters as sentient beings, after an independent review concluded there is strong evidence of their sentience.

Thank you for everything you did to make this inspiring progress possible. Your contributions — of money, time, and talent — are the lifeblood of our movement, and I’m deeply grateful for them. Wishing you happy holidays and a wonderful new year!